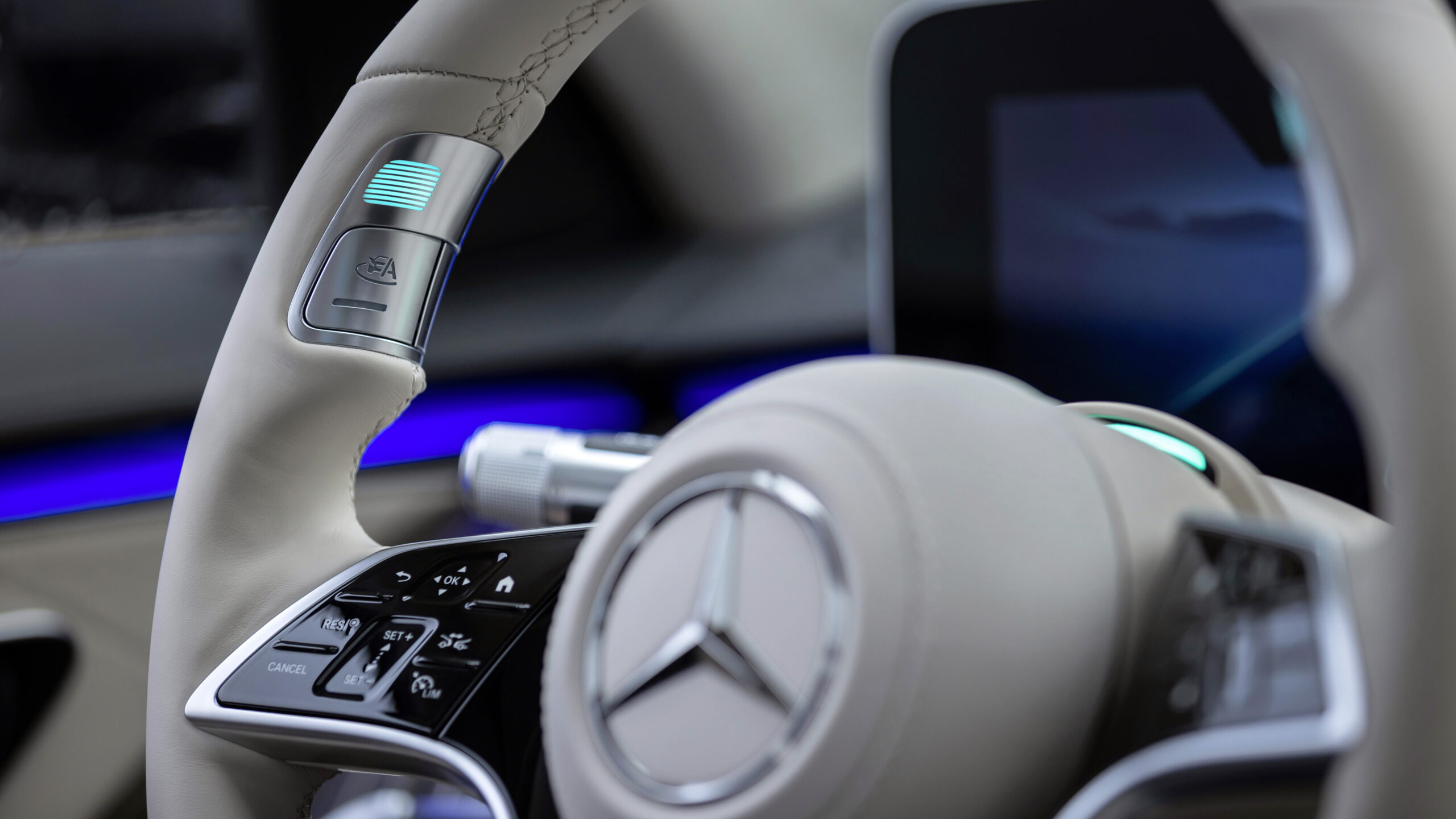 Mercedes-Benz is the first automotive company in the world to meet the demanding legal requirements of UN-R157 for a Level 3 system1. The German Federal Motor Transport Authority (KBA) has granted system approval for this on the basis of the technical approval regulation UN-R157, thus paving the way for offering such a system internationally2, provided that national legislation allows it. Germany has taken a pioneering role in this with the opening of the Road Traffic Act (StVG) for Level 3 systems in 2017. This is why the first customers will be able to buy an S-Class with DRIVE PILOT in the first half of 2022, enabling them to drive in conditionally automated mode at speeds of up to 60 km/h in heavy traffic or congested situations on suitable stretches of motorway in Germany. The special DRIVE PILOT equipment takes the strain off the driver and allows him or her to perform ancillary tasks3 on the central display such as online shopping or processing e-mails in the in-car office. The system approval also applies to the EQS.

“For many years, we have been working to realise our vision of automated driving. With this LiDAR based system, we have developed an innovative technology for our vehicles that offers customers a unique, luxurious driving experience and gives them what matters most: time. With the approval of the authorities, we have now achieved a breakthrough: We are the first manufacturer to put conditionally automated driving into series production in Germany,” says Markus Schäfer, Member of the Board of Management of Daimler AG and Mercedes-Benz AG, Chief Technology Officer responsible for Development and Purchasing. “With this milestone, we are once again proving our pioneering work in automated driving and also initiating a radical paradigm shift. For the first time in 136 years of automotive history, the vehicle takes over the dynamic driving task under certain conditions. At the same time, we are pleased that Germany is continuing its pioneering role in automated driving with this approval.”

The technical approval regulation with which such a system can be certified did not come into force until the beginning of 2021. Since then, it can be implemented in Europe – an opportunity that Mercedes-Benz was quick and the first manufacturer to seize. With the opening of the Road Traffic Act (StVG) for Level 3 systems in 2017, Germany was the first country to create a legal basis for the intended use of these systems.

Mercedes-Benz is initially offering DRIVE PILOT on 13,191 kilometres of motorway in Germany. Extensive test drives for this systems are already underway, for example in the USA and China. As soon as there is a national legal framework for conditionally automated operation in additional markets, the technology will be rolled out step by step.

DRIVE PILOT also has to cope with surprising traffic situations

On suitable motorway sections and where traffic density is high, DRIVE PILOT can offer to take over the driving, initially up to the legally permitted speed of 60 km/h. The controls needed for this are located in the steering wheel rim, on the left and right above the thumb recesses. When the driver activates DRIVE PILOT, the system controls the speed and distance, and effortlessly guides the vehicle within its lane. The route profile, events occurring on the route and traffic signs are correspondingly taken into consideration. The system also reacts to unexpected traffic situations and handles them independently, e.g. by evasive manoeuvres within the lane or by braking manoeuvres.

With LiDAR sensor and redundant systems

DRIVE PILOT builds on the surround sensors of the Driving Assistance Package and comprises additional sensors that Mercedes-Benz considers indispensable for safe conditionally automated driving. These include LiDAR, as well as a camera in the rear window and microphones, especially for detecting blue lights and other special signals from emergency vehicles, as well as a wetness sensor in the wheel well. As well as the sensor data, the DRIVE PILOT receives information about the road geometry, route profile, traffic signs and unusual traffic events (e.g. accidents or roadworks) from a digital HD map. This is made available and updated via a backend connection. The S-Class with the optional DRIVE PILOT also has redundant steering and braking systems and a redundant on-board electrical system, so that it remains manoeuvrable even if one of these systems fails and the safe handover to the driver can be ensured.

If the driver fails to take back control even after increasingly urgent prompting and expiry of the takeover time, e.g. due to a severe health problem, the system brakes the vehicle to a standstill in a controlled manner and with suitable deceleration. At the same time the hazard warning lights and, once the vehicle has come to a standstill, the Mercedes-Benz emergency call system is activated and the doors and windows are unlocked, to make access to the interior easier for any first responders.

The top priority for Mercedes-Benz when introducing such a system is safety, which includes high demands on operational reliability. The exact location of the S-Class is determined using a highly accurate positioning system. This is much more powerful than conventional GPS systems. In addition, data obtained from satellite navigation are matched with sensor data and data from an HD map. Sensor data collected by LiDAR, camera, radar and ultrasonic sensors can be, for example, information on road geometry, route characteristics, landmarks or traffic signs.

The HD map provides a three-dimensional street and environment image. The map data are stored in back-end data centres and updated constantly. Each vehicle also stores an image of this map information on board, constantly compares it with the backend data and updates the local data set if necessary. The HD map thus offers stable positioning through a representation of the surroundings independent of e.g. shadowing effects or a soiled sensor. It also provides information on road geometry or special traffic events such as roadworks. This high-precision map differs from maps for navigation devices by, among other things, its higher accuracy in the centimetre rather than metre range and its detailed intersection and track model.

During the conditionally automated journey, DRIVE PILOT allows the driver to take their mind off the traffic and focus on certain secondary activities, be it communicating with colleagues via In-Car Office, surfing the internet or relaxing while watching a film. In DRIVE PILOT mode, applications can be enabled on the vehicle’s integrated central display that are otherwise blocked while driving.

1SAE Level 3: the automated driving function takes over certain driving tasks. However, a driver is still required. The driver must be ready to take control of the vehicle at all times when prompted to intervene by the vehicle.

3Which secondary activities of the driver are legally permissible depends on the respective national road traffic regulations.