Bonn, Brussels, 28th September 2021: “This summer’s flooding catastrophes in Germany and the Benelux have made it absolutely clear that early and effective warnings can save lives,” said Teun Hendriks, TISA Technical and Standardisation Committee co-chair. “TISA has proven that TPEG Emergency Alerts and Warnings are an effective dissemination channel to inform travellers, who may not speak the local language, nor be familiar with the local geography and locations of towns, about various dangers, not only while driving, but also without the need to take their eyes off the road to look at their cell phone,” he concluded.

TPEG-based distribution of Emergency Alerts and Warnings now provide alerts/warnings to travellers in a safe way while ensuring compatibility with both in-vehicle navigation systems, as in-vehicle digital radio receivers, and ensuring that messages are understandable also for non-native speakers who are residents and visitors from foreign countries. Now, emergency warnings can reach also travellers and stimulate those at risk to take action. 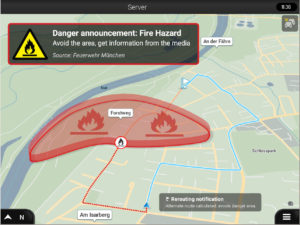 The trial, conducted in Germany throughout 2021 and concluded in September, confirmed the effectiveness of the TPEG-based Emergency Alerts and Warnings protocol, which now will be submitted to ISO for world-wide standardisation.

More information about this trial (which was partially funded by the ISF project1) will be made exclusively available at the ITS World Congress between 11 and 15 October. TISA and its members will be present in hall B5, booths #5011 and #5012.
For a demonstration of TPEG2-EAW, book your time slot here