Decision makers, disrupters and high profile companies from a range of industries including the European Commission spoke at the first ever Virtual ITS European Congress on key issues and game-changers for ITS in adapting to the crisis, post-crisis and for the future.  TISA President Thomas Kusche-Knežević spoke at the Highlight Session “Public-private cooperation for Safety on the Road” about the benefits of TPEG. 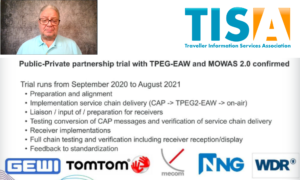 Once again, TISA served as successful example of how the collaboration between the public and private sector can foster the advancement of technologies in the field of road and traffic safety and benefit the large public. “Today, TISA can boast of a global membership covering the entire value chain for traveller information, with hundreds of millions of TMC devices all over the world, and a significant percentage of devices with TPEG in cars with advanced Assistance Systems.” said Thomas Kusche–Knežević in his presentation of the Emergency Alerts and Warnings (EAW). “Thanks to this cooperation, we at TISA were able to develop technologies that can be used worldwide, such as EAW. In particular, the cooperation between TISA and BBK, founded by the EU/International Security Funds, has been crucial for the development of EAW.”, he concluded.

Participants had the chance to learn about the advantage of TPEG, which is not only the readiness of implementation on every distributions channel, but also its design, which features a powerful tool box. In the framework of road safety, the TPEG EAW application offers the most promising solution, as any alert and warning message can be shown on a TPEG device worldwide, giving the possibility to also choose a preferred language.

The next steps for TISA will be to test TPEG EAW in a field trial in Germany. Stay tuned!

TISA (Traveller Information Services Association) at #VirtualITS20. 'A traveller will always receive significant information about a relevant event thanks to TPEG emergency alerts and warnings'. Find out more at https://t.co/Js6cJUDfNI pic.twitter.com/3IyOzQO6bR

TISA is delighted to invite attendees of the Virtual ITS European Congress to join TISA President Thomas Kusche-Knežević at the Highlight Session “Public-private cooperation for Safety on the Road”, on 9 November (1 to 2 pm CET).

Mr Kusche-Knežević will highlight the benefits of the public-private partnership in preparing the first field trials in Germany for TPEG2-EAW (Emergency Alerts Warnings).

Don’t miss the chance to learn about this application, developed by TISA and the BBK (German Federal Office of Civil Protection and Disaster Assistance) to disseminate Alerts to travellers/public at large and warn about emergencies.

An insight into a Connected Corridor for Driving Automation, the moral consequences of Autonomous Driving product developments and an innovation hub for autonomous driving. TISA’s September Committee Meetings started at full speed and gave Members the opportunity to exchange knowledge and ideas with three external organisations and to catch-up with the TISA’s overall reporting.

The first presentation concerned the European-funded project CONCORDA (Connected Corridor for Driving Automation), presented by ERTICO Senior Manager Dr. Eusebiu Catana. CONCORDA contributes to the preparation of the European motorways for automated driving and high density truck platooning with adequate connected services and technologies. The main objective of the Action is to assess performances (reliability/availability) of hybrid communication systems, combining 802.11p and LTE under real traffic situations. The project is deployed in seven Pilot sites in five Member States of the European Union (Belgium, the Netherlands, France, Germany and Spain) and aims at guaranteeing the interoperability and continuity of its services on all test sites according to the C-ITS Platform recommendations.

From a test to the other, Robert Siddi, Sales Director at ZalazONE, gave an insight into this European hub project that comprises a test field for Autonomous Vehicles. Unique in its kind, ZalaZone is one of the European centres testing and piloting 5G developments in telecommunications (since 2019), with a EUR 127 million public investment on a 265-hectare area. The hub aims to offer technologically advanced laboratories for educational and research purposes and become one of the main centres of Autonomous Vehicle developments in Europe. A key component of the project is the smart city zone concept, an environment for research and testing of future technologies both in a downtown and suburban context.

Last but not least, TISA Members were given food for thought on Moral Consequences of AD Product Development with a presentation by Nora Blessing from TomTom. Current AD technology can manoeuvre without hitting obstacles, but lacks a great amount of fine-tuning. Today’s situation still presents major roadblocks, such as the lack of robust software that can make human-like decisions in any possible scenario, softwares that do not always recognise humans on the road and accidents and system failures that still occur. In addition, moral aspects are involved: who is responsible for system failures? Shall the vehicle kill an elderly person or save a young child? Throughout her presentation, Ms. Blessing tried to answer how product managers and software engineers can systematically navigate the moral component of their job. She provided a background on TomTom’s process, touching upon a theoretical angle, research and practice and concluded with practical findings on awareness, copying strategies and expectations, and theoretical findings.

With TISA is concentrating most of its work on the impact that Automated Driving will have on traffic and travel patterns, these three presentations offered a valuable opportunity for Members to gain a wider insight into the matter.

All the presentations are available on TISA Confluence.

TISA is presented at the 14th OADF event

TISA once again contributed the OADF discussion platform in its 14th edition. During this mixed online and onsite event, which gathered 140 experts, Teun Hendriks, Co-Chair of TISA’s Technical & Standardisation Committee, introduces TISA’s I4 activities, while Martin Pfeifle, CTO at NNG, presented “The Intelligent Co-Driver” which provides visual and voice guidance created from different sources including TPEG.

Mr. Henriks provided an overview of TISA’s latest activities in the domain of Autonomous Driving (AD) and stressed the need for external information related to I4AD, including design principles for an AD-oriented protocol and a three-phase model for providing information to AD vehicles. As reported by Mr. Henriks, TISA is currently considering three initial use cases in this context: precise work zones, the coordination between AD and manually driven vehicles, and emergency vehicles approaching.

Last but not least, OADF participants had the chance to learn more about TISA’s TPEG3 technical aspects and concepts thanks to the Association’s two white papers, available at this link and focusing on the description of TPEG3 and related technical and business requirements.

More information about the topics discussed at the 14th AODF can be found at this link.

This article was written by Sylvia Franzen-Brauer, Teun Hendriks und Stefan Schwardt, and was translated into English for TISA’s website. The original article can be found in BBK’s journal.

Since October 2016, the German Federal Office of Civil Protection and Disaster Assistance (BBK), which is 75% co-financed by the German Internal Security Fund, has been working on the socio-technical improvement of the public safety warning system in the country. Among other things, there is a contract to develop new warning channels because, except for traffic reports, no warning messages can be sent to people affected by road traffic. For this important reason, the project included new output devices, identifying in-vehicle navigation devices, among other things, and leading to the testing of a universally applicable solution. The result is a specification developed with international partners, which can be used worldwide for the output of public safety warning messages on end devices in the navigation and traffic information area: TISA SP19006. This specification enables warning disseminators – i.e. manufacturers and operators of navigation and traffic information systems – to transmit appropriate warning messages, worldwide.

Development of the specification

The partner involved in the development of this specification is TISA (Traveller Information Services Association), an international association working in the field of traffic information.TISA provides TPEG specifications and standardized guidelines. TPEG (Transport Protocol Experts Group) specifications are published by ISO in the ISO 21219 series for traffic and travel information. The protocol can be transmitted via different data channels, such as digital radio and cellular communication. The stakeholders active in the development of the current TISA TPEG2-EAW specification involved the Federal Office for Civil Protection and disaster relief (BBK), represented by the ISF project, the company Mecom, Mo-WaS and Teatownlake, in interaction with the TISA task force. The TPEG format can boast of many users, among which Audi, BMW, Mercedes and VW, device manufacturers for navigation devices such as NNG and Garmin, TomTom and HERE, system manufactures and developer GEWI, and radio stations such as NDR and WDR. To process the warning messages TPEG uses standardized items, events and recommendations for actions. Like with a warning message in CAP (Common Alert Protocol) standard, the specification shows how it can be distributed by modular warning systems for the broadcasting to TPEG-enabled terminals.

In addition to the basic functions for transmission, there are also:

In the coming year, the TPEG2 EAW user specification for a TPEG EAW service will be tested in a field trial in Germany. In this trial, the complete service supply chain, up to the recipient, will be examined. The results and experiences identified during the trial will be used for refinement and will update the TPEG2-EAW specification. In addition, the knowledge gained will be captured as best practice and compiled in a guideline document.